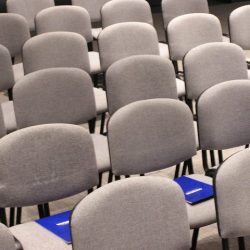 The AGM was held on 13 November 2019 at the Church.
.
After the preliminaries the Treasurer introduced the Financial Report for the financial year 1st September 2018 to 31st August 2019. To the nearest pound, the starting balance was £20,389, net profit from events was £500, income from subscriptions,sponsorship and donations received was £1319, and misc. income items and general expenses totalled -£151. No monies were donated to the Church in the financial year. The end of year balance was £22,057. The meeting adopted the Financial Report as written. In addition the meeting agreed that in view of no monies being transferred to church projects this financial year, a proportion of the end of year balance shall be invested in a savings account.
.
The Committee and Officers were agreed as:
Chairman: Dominic Moore
Secretary: Bill Tamblyn
Treasurer: Stewart Bilsland
Publicity Officer: The meeting agreed to Emily Dumas in her absence.
Webmaster: Geoff Gonella (Note. The position of Webmaster has been consolidated into a seat on the Committee).
.
The following events were agreed for 2020:
– An Evening of Poetry (date to be decided by Committee).
– A short concert by Dominic and friends (a Sunday afternoon).
– A Peldon history event (Geoff to discuss the content with Elaine Barker).
– Peldon fete (but the date is the subject of discussion with the Kearneys).
– ‘Music for a Summer Evening’.
Note. An event about bees, and a Sing-along event were left to the Committee to decide upon.
.
The Treasurer and Secretary reported that the changes needed to the Constitution to align it with the latest requirements of the Charities Commission had been drafted. This was informally shown to a representative of the Charity Commission, and the outcome was favourable. It was agreed that a new version of the Constitution should be progressed on this basis.
.
The meeting agreed to increase subscriptions, in view of there having been no increase since the Friends was formed, despite inflation. New rates were agreed as: Annual, individual: £30, Annual, family: £45, Life membership, individual: £750
.
The Webmaster’s Report for 2018 was adopted.
.
The meeting was closed by the Chairman, who thanked the attendees for their support and input.
.
Note. These notes are for general information. Minutes will be issued through the normal channels.